The development team spent the last several weeks evaluating the aftermath and determining what aspects of the historic existing church facility could be salvaged and which features needed to be replaced with new construction.

The detailed evaluation and planning phase is expected to take roughly three months with construction beginning in 2021.

“God has provided us with a real opportunity during these interesting times, one that will allow us to accommodate our community better than ever before as we move to rebuild our place of worship,” said Judi Hoffman, Pastor at East End United Methodist.  “We will not be coming back at the status quo, but more accessible and much stronger, while maintaining the historic significance of this magnificent landmark.”

East End United Methodist Church was founded in 1889. In 1890, a wood-frame building was erected at 1100 Fatherland Street and was used until 1905. In 1905, the parcel of land at 13th and Holly Street was purchased, and money was raised to build the walls, roof, and tower. In 1907, the cornerstone was laid, and shortly thereafter the iconic, stained-glass window facing Holly Street was installed. In 1921, an East Wing addition for Sunday School was built behind the sanctuary building. The parsonage was built two years later in 1923, and in the 1950s, the Neighborhood Wing was built in the rear part of the property.

EOA Architects was selected to oversee design and Nashville-based EMC Structural Engineers will be leading the initial assessment of the damaged facility. 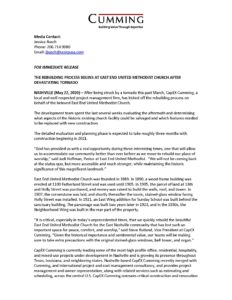