The 12 most expensive US cities for construction

The company’s Q1 construction market analysis predicts that the industry’s resurgence will return in earnest starting in the third quarter of this year, and the firm said it is already seeing a significant pick up in activity and discussions related to new and upcoming projects.

The cost of construction is up in the majority of markets that the company tracks, due to the skilled labor shortage and rising material prices, especially for items such as steel and lumber, it noted.

The cities covered in the report will bounce back from the pandemic at different rates, he said, and costs to build in each city vary greatly by building sector.

He also noted that previously high-volume sectors such as retail and offices are being replaced by demand for data centers and mission critical facilities. This trend has been especially prevalent in Southern and Midwestern states, where data center construction is increasing at an impressive rate, he said. 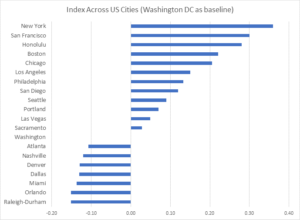 Some of the findings are not surprising, given that San Francisco and New York City have long dominated construction costs in the U.S. and even the world. Even before the pandemic, the two cities were Nos. 1 and 2 respectively on Turner and Townsend’s 2019 International Market Construction Survey.

The numbers also highlight the discrepancy in costs between the cities with the highest construction costs and those with the lowest. For instance, these are the highest costs for these types of projects in Raleigh-Durham, N.C.: